It's the most important part of your production arsenal, and one of the most asked-about subjects in the industry. Learn why you need a demo reel, and where to start. 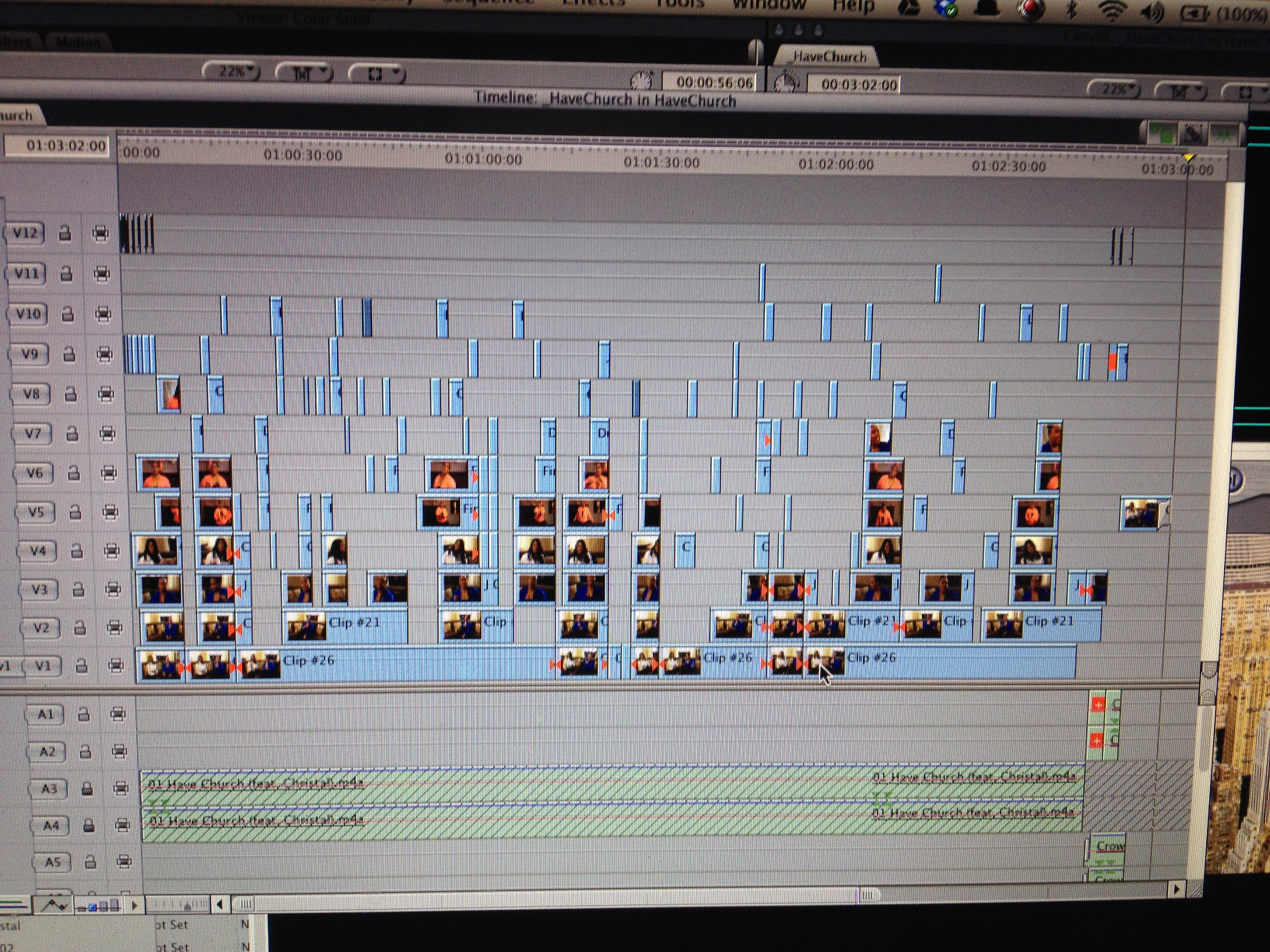 People ask me all the time about that one little super-important thing that every production or post-production person should have, and since I’m not one to turn people away when they’re curious about the world’s best profession – ahem – I wanted to address the basics of the demo reel.

Seriously, though, this is for you because I love talking to people about the process. Even if you already have a reel, I’ll discuss different tips and tricks to take your reel to the next level. So keep your eyes peeled and your Avids primed, here’s how to create a killer reel.

What is a demo reel?

A demo reel, reel, sizzle reel, show reel, or whatever else you’d like to call it, is essentially a moving portfolio of your film/video/graphics/animation work. Traditional artists and painters are expected to have a portfolio, and digital artists and filmmakers are no different. Your demo reel is your personal commercial for the work you’ve done. In short, it’s a trailer for about you.

Employers, production companies, agents, and other parties interested in using your services often ask to see what you can do. This is your chance to show them.

A reel should not be confused for a portfolio, which is different. A portfolio is a collection of many pieces of work you’ve created. A demo reel is one piece of work composed of the best bits from all of your projects.

Why do you need a reel?

You need a demo reel because no one believes you when you say “I’m a really good filmmaker/editor/animator/whatever”. Rule numero uno about the production world is, “show don’t tell”, and that’s exactly what a demo reel should do. In order to show future employers, clients, or jealous friends how good you are at your particular skill (directing, producing, editing, graphic design, animation, even acting), you need a reel that displays your work. Many employers won’t even consider candidates without a reel of some kind, and consider it just as important – if not moreso – than your resume.

How do you make one?

There are millions of ways to imagine and compose a demo reel. No two reels are alike, just like no two editors are alike. That being said, in order to make an effective demo reel there are a few guidelines to stick to. The most basic way is to select clips from pieces of your work, edit them together into a montage, and pair them with music. Essentially, you make a music video out of your best shots. That’s only the bare minimum, however, and no one likes it when you only do the bare minimum.

Don’t get me wrong; the bare minimum can be extremely effective, especially if you know what you’re doing. Simple is almost always better, and with the minimalistic design of iEverything, simplicity is “in” right now. So don’t clutter up your reel with cheesy filters and those awful transitions and star wipes. No, keep it simple. Edit to the music. Select your best shots. Let your work speak for itself. Briefly.

Which brings us to the next point.

How long should it be?

Everyone has an opinion about this; my opinion just so happens to be correct. A good demo reel should be absolutely, unequivocally no longer than 3 minutes*. I promise you don’t have any more perfect shots than that. If you do, you don’t need a reel to get a job, because you’ve worked on so many projects you should already have a solid network of people who know your work.

I recommend making your reel well short of 3 minutes, in fact. Between 1:00 and 2:00 is about where you want to be. Keeping your reel short is extremely important, and not just for the reasons you think.

Sure, you might want to keep it short because you don’t have that much work to show off; and that’s true. No matter how great you think your work is, it simply isn’t that good. But brevity is also key because part of what people judge about your demo reel is how precise and discerning you are. An important part of being a pro is knowing where to cut the fat, and how to keep things moving. If you can’t keep your reel under 3 minutes, how are you going to advertise for a television episode in ten seconds? Or 3 seconds? Yes, you may be editing 3-second commercials.

It’s also important to keep that timer low in order to avoid pissing off the viewer. If someone’s considering you for a job, most likely you’re not the only person who applied. The sad truth is you’re probably one of hundreds of applicants. If you don’t impress them very quickly, they’re only going to dislike you more for wasting their time with a long demo reel. Or they simply won’t look at it at all.

*(unless it is for a very specific purpose, such as a government contract or proposal)

What should it include?

Your demo reel should include only your best work. Nothing else. Nothing. It really is that simple. And it is vital to understand; not all of your work is your best work. Have some humility and cut out that shot you love from your student film. It’s really not as good as you think.

Your reel should also include work that’s recent and relevant to what you do. If you claim to be a 3D animator, then keep that footage you shot of a beautiful sunset out of your reel. Show me your 3D animation. C’mon.

Once you’ve got the basics down, you should also try to include some personality (flare?) in the execution of your demo reel. Text, graphics, music, dialogue, even narration can work like wind on the coals of the fire. Your work just might glow. This should be done with extreme caution, however. Watching an otherwise good reel that’s been ruined by unnecessary ‘personality’ is as much fun as having someone shove staples in your corneas.

But if you can do it right, maybe you end up with something fresh and distinct. Maybe you do something completely different, like this trailer for the Blacklist:

What if I don’t have enough work?

Although it’s important to keep your reel brief, you should also show off a wide variety of work. And you should have enough, even if you’re a student or a newb. For instance, if you’re a cinematographer who wants to film car commercials, I would expect your reel to have some excellent shots of, you know, cars.

If you’re just starting out, haven’t been on that many shoots, or want to change niches and find your portfolio lacking, you might think you’re hosed. But the nice thing about a demo reel is that you don’t need a whole project to add shots to the reel. You just need the shots.

For instance, when I started as a producer at Sprocket Media Works, we were a brand-new production company. In order to show clients what we could do, we needed a reel. But we hadn’t officially opened the doors yet, and thus had very few things to show off.

That didn’t stop us. We went out to shoot, talked to people, made deals, worked for free, filmed products, attended events, and just, well, sort of made it up as we went along. We ended up with what you see above.

Want to film sports cars? Then go out and film some sports cars. Pull some strings, meet some people, or even ‘steal the shot’ using guerrilla tactics. Want to direct talent? Make a few spec commercials. Just because you’re not getting paid to shoot it doesn’t mean it can’t go on your demo reel.

Don’t lie, don’t steal from others, and don’t be lazy, either. This is a competitive industry. If you really want to succeed, you’re going to have to go after some of those shots with a little bit of tenacity.

Where should I put it?

In addition to that, see if you can find creative places to show it off. For instance, if you’re writing a blog entry about demo reels, you should link to yours in that article. 😉

Things to avoid or include.

The term “demo reel” is so broad that you could really include just about anything if it accomplished your goal. Here are a few things that the typical demo reel could either stand to lose, or benefit from adding.

Be creative. I can’t give you all of the answers! A good place to find an in-depth run-down on tips to make your reel better is this article on Premium Beat. They also have some cool reels you can learn from.

Have any other suggestions for how and why to make a reel? Start a conversation in the comments. If you like the way I write, or want to get a deep dive into how to make book trailers, check out my books page.